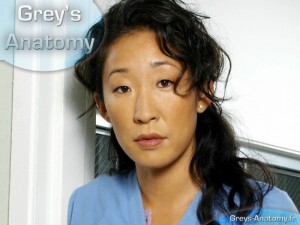 When you love something (or someone), can you stop yourself babbling about it?

During our office break, every single soul in the pantry heard how I bragged about my love for Grey’s Anatomy, to the point that I argued Gossip Girl (let’s call it GG) was nothing compared to it. “GG is really for high school, I didn’t even finish its first season,” I bluntly said. Inside my head these thoughts went on: The conflict is shallow; the characters are “just” fashionable except for Dan. It’s every parent’s nightmare. (I bet it was intentionally made so.)

“Are you serious..” I forgot what else she said to defend GG. I wasn’t paying attention. Peace, Sana.

“I finished the entire 26 episodes of Grey’s Anatomy last weekend,” I confessed.

“Ohh.. you’re a Grey’s Anatomy Virgin. You’ll find out in the next season how stupid the main girl is.”

“Meredith? Her name is Meredith.”

Meredith has foxy eyes, a super slim body, and a husky voice perfect for narration. Who won’t like her? But Meredith is not my type. She’s too dreamy. I like Cristina Yang (portrayed by Sandra Oh) – competitive, challenging, cold. Cristina is the character I wished to become. She says what she thinks is right – of course, ’cause she’s rarely wrong.  “What if you failed the board exam?” Meredith asked her. “I wouldn’t,” was Cristina’s curt reply. Once she offended the attending surgeon, who was then temporarily replacing Dr. Bailey, Dr. Burke, her boyfriend, told her to apologize. She clearly told Burke: “I’m not used to being wrong.”

If Cristina’s surname happened to sound well with ANATOMY (e.g. Yang’s Anatomy), it would have been her show. Just kidding. Meredith’s complicated love life and family history seem more interesting to the nosy viewers. And with Cristina’s personality, I doubt if she’d ever narrate neurotic, narcissistic stories to anyone. Maybe I can tolerate watching other characters waste their time, but Cristina is a charmer – an ever interesting piece of Grey’s Anatomy.

One Reply to “Issa: A Grey’s Anatomy Virgin”