Like a few lucky kids, I grew up hearing stories from mom – whenever she was in the mood to tell tales – real or not. Now that 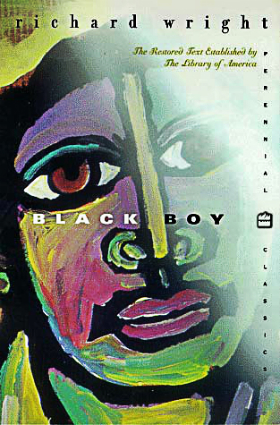 I’m far and well, I should admit, a grown-up, I suit myself with audio books or excerpts available online.

To spice up my domestic chores, I listened to Heidi by Johanna Spyri. Treasure Islands by Robert Louis Stevenson painted pictures of diabolical characters in my dreams, I especially liked how vividly the blind man,called Pew, was introduced . Caliber 32 is a fast-paced story you ought to finish overnight, albeit the plot wasn’t that great, the characters and dialogues sounded real. I also enjoyed The Lord of the Rings’ adventures; the story-teller was superb.

But Black Boy was the best audio excerpt I’ve ever listened to – so far.

I heard about Richard Wright through my ESL mentor, Stephen Krashen, a pioneer of reading extensively and voraciously to learn English as a second language naturally. Read about THREE million words and you don’t need to study abroad just to be fluent in English. In one of his talks, he praised the Black Boy from Memphis who turned himself into a writer despite extreme racial discrimination he suffered during childhood.

“Do you think you’ll ever amount to anything?” was the daily mockery he hears from those around him. Sometimes, it’s not a question, but a prediction: “You’ll never amount to anything.” Richard was pugnacious; he had always fought back. His intellectual curiosity and fondness of literature made him realize he was living a special, separate, and stunted way of life. When it dawned on him that life could be lived freely and way better, his determination to escape slavery became stronger everyday.

Black Boy is not a good pick for a lullaby. It’s a tear-jerker, a creed, an enlightenment.