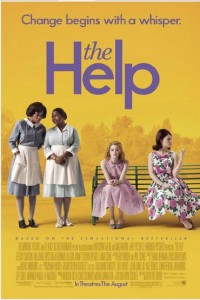 Skeeter, a white American raised by a black nanny during the 1960’s Civil Rights movement, decides to feature the stories of American-African housemaids – their sorrows and hardships as they daily serve the white families. She comes up with a book, The Help, in which “colored” housekeepers reveal their grievances.

If you think the plot is predictable, you’re probably right. Dissenters seem to have the same fate: either they become outcast or they die mercilessly. But The Help does not explore any bloody revolutions, just a subtle (even educated) appeal against  racism. The movie realistically presents that revolting against injustice does not solve it overnight.

Why does Emma Stone appear on movies terribly difficult to dislike? This has been her best role to date (I’ve only seen Easy A and this, FYI). Though I like Emma a lot, I’d say she’s just the cherry on top of the cake’s icing, Viola Davis (Aibileen) and Octavia Spencer (Minny) are the main ingredients. Davis moved me to tears for her poignant tales; Octavia made me laugh.

I never had the luxury of having a nanny, even a maid. I have never known how to oppress people who were poorer than me. Neither was I mistreated, nor will I be unfairly treated on the basis of my nationality. I’m not sure if I should call it luck that my race did not seal my fate. But if ever it had, I would do everything to break free – just like what the freedom and justice champs did in this movie.