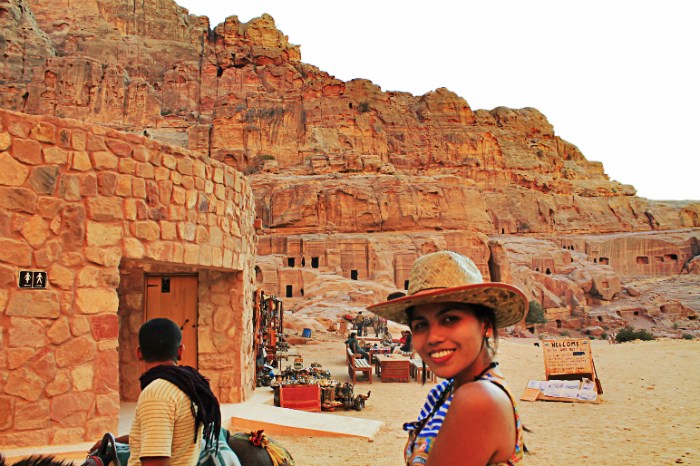 Petra, in the Philippines, is considered a very old-fashioned and embarrassing name. Thanks to Roderick Paulate and Vice Ganda for popularizing the old and modern film “Petrang Kabayo” (or Petra – The Horse). Meanwhile, in the Middle East specifically in Jordan, Petra is widely known as “rock”, coming from the Latin word “petrae” (remember that if you want to score high in a history pop quiz).

Many of my facebook friends liked the photos of Petra. I’m not sure if they were just fond of my cheap cowgirl hat or my funky donkey riding or simply amused by the fascinating colors and structures of rocks, I wouldn’t know till they give me some feedback. My best guess: they were thrilled by architectural carvings, shapes and sizes of rocks. Think of Mount Rushmore in the US and 127 Hours by James Franco. Or you can stop thinking of those two pale metaphors and start saving up for a trip to Petra.

Anyone who still has thirst for adventure, healthy curiosity (joints and knees!) and a blessed pocket should visit Petra. In a half day (12nn- 6pm) of walks and climbs to Petra, I and my friends (Whena and Girlie) marveled at several carved tombs, temple facades, funerary halls, and majestic rock formations and colors. Our guide told us that we had covered 10% of the rock city during the half-day stroll, ride, and hike. Seriously, just that!? 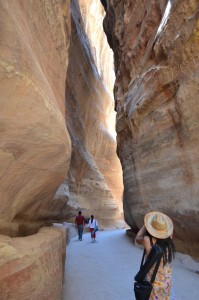 You can never underestimate the complexity of a city built by the Nabataeans, ruled by Romans, and traded with Arabs, Chinese and Indians. Petra boasts of rich architecture, wide trading, and intelligent water system  (physicists would call it “hydraulic engineering systems”).
If you’re not a fan of history, you may skip the tourist guide’s history lessons and head directly to exciting sites such as the location of Spielberg’s 1989 film “Indiana Jones and the Last Crusade”. One of the movie’s mysterious settings, The Treasury or Al Khazneh, appears dramatically at the end of the Siq. When I thought we discovered Petra’s most sacred secrets after seeing The Treasury, we eventually learned that we had just begun the quest.

Want practical tips on planning your trip to Petra? I’ll tell you about it on my next posts about Jordan.