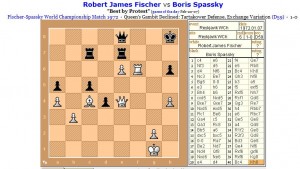 Bobby Fischer Against the World is an insightful look at the life of a chess genius. As they always say, talent is one thing, deliberate practice is another. Bobby has both. Son of a brilliant woman, Regina, he had the make-up of a genius that manifested through the superior battle of the minds- chess.

Bobby’s desire to get better at playing chess was insatiable. He’d have a meal with a chess board, sleep with it, look for anything related to it wherever he went. He voraciously consumed all chess magazines and books he could find. It was natural for his mom, unemotional as she was, to worry about her son’s sanity. But psychiatrists told her there were worse things to worry about than obsession in playing chess.

The doctor must be right. Bobby Fischer became US national champion at age 15. Imagine Justin Beiber’s fame – only Fischer’s was an intellectual pursuit. His reply to an interview was funny as he was showing a headline ‘Teen-ager’s Strategy Defeats All Comers‘. HOST: This strategy, did it involve any finances? FISCHER: No. HOST:Any help from other people? FISCHER: No. HOST: Did it make people happy? FISCHER: ‘Made me happy. Laughs.

Later the contributors related how unstable Fischer was. How difficult it was to convince him to fight Spassky on a World Championship match in Iceland. As a chess player, I can somehow relate to his feelings – even though I didn’t have a troubled childhood. Fischer had fears, like most humans. Fear of failure. When you play chess, you are a paranoid (on the board), anticipating all possible attacks, tricks, and traps you and your opponent might use.When the fun is gone in playing, and the stakes (i.e. money and fame) are huge, people get scared and goof up.

If you haven’t seen the documentary film, I hope you would. Don’t be disheartened by his life story. Some people who play chess testified that they become better thinkers – some even showed improved Math scores. It just happened that Fischer got the title he had dreamed of to soon- World Chess Champion at the age of 29-  he didn’t know what to aim for next.

I wasn’t sure what I felt after watching. Mixed awe and sorrow? I slept for five hours after. Watch the documentary and tell me what you felt or thought about it.

One Reply to “Bobby Fischer Against the World”