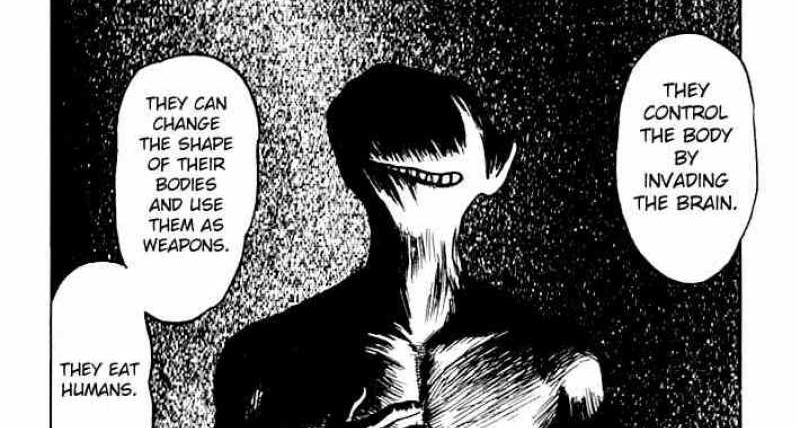 Cold-blooded, eccentric and murderous aliens called “parasites” plot the absolute extermination of mankind. They believe they are the antidote to our poisoned world. In the face of this threat of invasion, who shall stand up to fight these blood-thirsty monsters to save humanity?

Shinichi must be the chosen one, as only a part of his body (his right hand) has been eaten by a parasite named Migi, whose company later ceases to be a terror and annoyance as they go through many trials, tests and triumphs together. As the story proceeds, their typical host-parasite relationship turns into an unusual partnership as they both strive and succeed to get to know each other’s true nature.

But if no one else understands these unfriendly cohabiters but Sinichi, how is he supposed to fight them? How can a single young man continue to coexist with his right-hand parasite,Migi, while he fights its malevolent kin? Could he at least protect his own family and his endeared woman, Murano, from the horrendous fate awaiting them?  Would they ever return into the simple and peaceful life they once lived?

Parasyte, Hitoshi Iwaaki’s award-winning 64-Chapter manga series, is certainly commendable. He delicately weaves and tackles the different facets of human emotions, rational as well as universal themes like love, relationship, death and grief. As to the art, I would say, it has been meticulously drawn. Never will you see a single sloppy page.

Judge it with your own sight and taste. It completely charmed me. If you’re not afraid or appalled of a story with shades of violence and killings, you might enjoy this manga series.

No comments yet
manga parasyte seinen