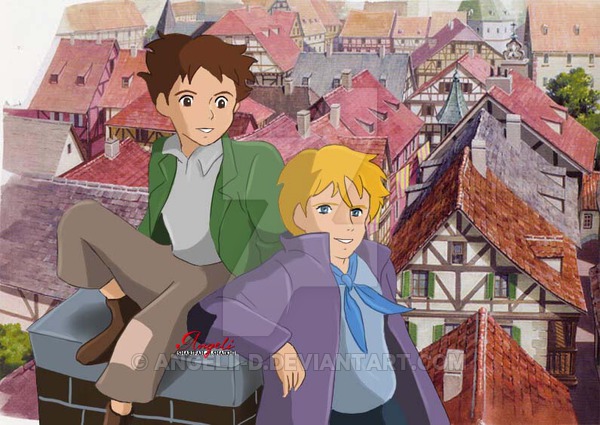 As a kid, I was truly fascinated with this anime. Melancholic might have been the general theme yet it was massively awakening for a kid at 10.

This is a story of Romeo, who came from an poor family. When his father died, his mom didn’t really want to sell him as a chimney sweeper yet they would have died of hunger had she not done so.

From there on, Romeo’s poignant tale began. On his way to Milan, he met Alfred and became really close to him. But they went separate ways after one stormy night on a boat journey to Milan.

Survival was unimaginable yet Romeo got through through the harsh storms and sold himself as a slave to a family, where he would meet Angelita, an angel sent by God. She happened to be the adopted daughter of Romeo’s master. The girl taught him how to read. (A scene I love so much.)

I was just a child then, yet I thought she had given Romeo the best gift ever: learning how to read.

This act liberated the kid from the bondage of ignorance. And there was this scene where he was filled with bliss because he could finally make sense of a book’s story. Romeo struggled to decode the words in the book, “Three Little Pigs”.

The other scenes of the story tackled friendship, valor and unity. I even remember their group’s song of solidarity and camaraderie, which runs like this:

Sadly, the story ended tragically with the early demise of Alfred and Angelita. They were two of Romeo’s beloved best friends.

These events propelled him to pursue his dream of becoming a teacher to reduce poverty. He wished to shun illiteracy.  His later life was not explored in the story but he reached his aspiration.

He became a teacher, fulfilling his promise to his best buddy, Alfred.

I cried a river.

I believe no other anime show had the same transforming power.

No comments yet
anime favorites