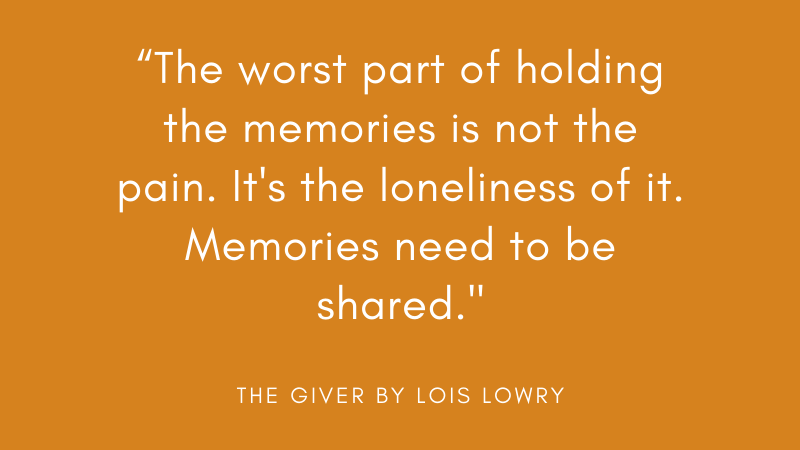 After reading a blogger friend’s post on best books to read during quarantine, I clicked on her compilation of free e-books and immediately downloaded “The Giver” by Lois Lowry. Without reading any summary or review, I just read through a couple of pages to see whether I was going to like it or not. In just a few minutes, I was engrossed. I kept wondering what else the “strange world” had to offer.

Jonas lives in a perfect little world where each family only has two children, parents encourage communication of “feelings” and “dreams” and school system offers milestones every student must reach. Of these, turning 12 years old offers the most drastic, interestingly permanent change: the assignment of vocation based on the student’s skills, talents, volunteering hours as well as the careful observations and evaluation of ruling elders. To Jonas’s surprise, he has been selected as the Receiver of Memories, an honorable albeit controversial vocation. A role that is going to change everything Jonas considers as “normal.”

As Jonas describes his community, I see only an affluent, organized society. Obedience and discipline are highly valued and rewarded fairly. It reminds me of utopia – an ideal society where everyone is equal, no one is starving, and no success is attributable to an individual. What could go wrong with that?

As I continued reading, I remembered my own childhood. The excitement for the next level, constantly looking forward to what’s next. Unlike the kids in the book, I learned to ride a bike when I was almost ten. For them, everyone has to know how to ride one by nine (and some even learn earlier because their older brother or sister taught them secretly – an infraction that isn’t punished harshly in their community). The ceremonies are odd because they do not mimic the traditional school’s commencement. No one gets medals for being the “best” in a subject matter or for getting the highest grades.

More stark differences with our society and theirs emerged as I kept reading. All was okay and seemed justified until the word “release” was explained by The Giver, Jonas’s mentor. It was a sickening concept and it was for me the “deal-breaker.”

When has it been “normal” to kill babies and old people? Why do babies need to be away from their real mothers? Why do the old people live separately from their families? A lot of questions begin to form as soon as vague words such as “love” and “release” have been introduced and explained.

Fans of communists would think the author is oversimplifying the concept of an equal society. But I think Lowry is only trying to make the book accessible to schoolchildren. It makes a good prompt for teachers discussing alternative ways of organizing societies.

I would never require Cyd to read this book. If he’s curious, though, I’d let him read it and I’d be happy to discuss what he thinks about it.

Have you read the book? What do you make of it?

No comments yet
Lois Lowry the giver