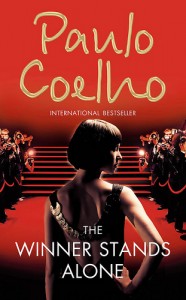 Igor wants nothing but enjoy a life of financial freedom with his wife, Ewa, whom he’d destroy worlds for. He simply wants to build a home with her in Baikal lake- undisturbed, unperturbed. Yet the arduous path he had to go through transformed him into an “evil one” in the eyes of his angel, Ewa. She left him one day. But how far can she get away from him?

The Winner Stands Alone is the first book of Paulo Coelho that I’ve ever owned – and finally read. It was a present from my cousin, Ate Burnz, on my birthday last year. I instantly started reading it last year but when the tone became too preachy and the philosophies overwhelming, I put it down. I thought it’s another psychology crap wrapped in a tale. But I was wrong.

This conversation I had with Coelho was different from the previous talks I had with other authors. Most writers I meet, tell. Coelho lets you think and talk back. It seems that every time he presents a character, he poses a question, “aren’t you just like him/her?” Then you notice yourself pausing to ponder.

If Liz could hear me say this, she’d be thrilled. She was (I’m not sure if she still is) a Coelho fan while most would read “Tuesdays with Morrie” or “Who Moved My Cheese?” Joanne, a close friend, is also a Coelho fan. Only Issa has not been charmed – till The Winner Stands Alone was given a chance.

When you think “who you are” is “how others see you“, then you’ve got this syndrome. It’s not a new concept, just a new term for image. When what matters most is how the world perceives us, we are flagged “normal“. It’s titillating how Coelho scorns models, actors, directors, screenwriters, press/paparazzis and the world of celebrities. It’s believable that he has lived among them.

Since most of us won’t probably make it to Cannes Festival, we’d rather borrow Coehlo’s non-conforming lens. Someone who has seen much to be fooled with the fancies of the celebrity world. Someone who has moderate sense of humor to ridicule the dreams of many to become “stars”. Someone who probably stands alone in the belief that superstars & superclass aren’t truly happy with their real lives.