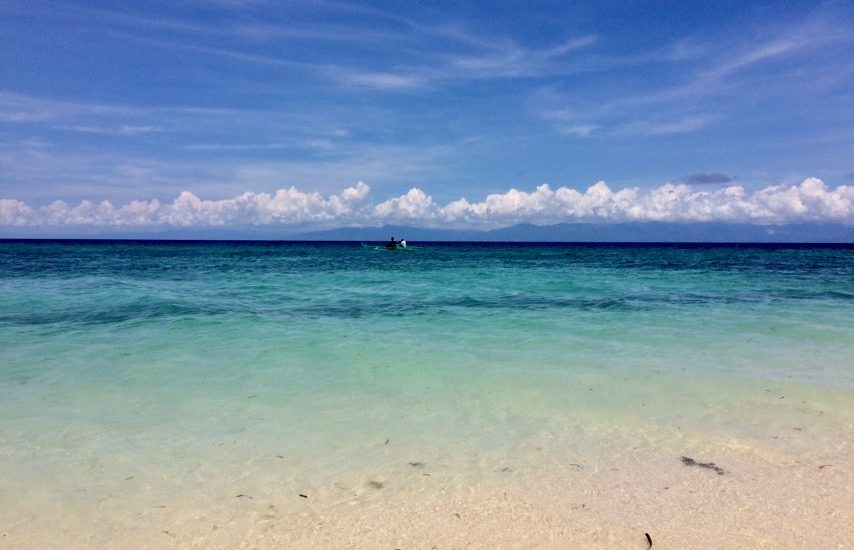 Just three hours and a half from Cebu City by bus, Badian is a famous stop among thrill-seekers and nature explorers searching for thrilling jumping spots, beautiful waterfalls, and diving spots teeming with rare sea creatures, big and small.

The two biggest draws of Badian are a Canyoneering trip to Kawasan Falls and an easy side-trip to Moalboal’s dive sites. Fans of dramatic mountain scenery can also use Badian as a springboard for hiking Osmeña Peak in Dalaguete or for those fascinated by giant sea creatures, visiting the whale shark watching area in Tan-awan, Oslob.

But the town of Badian is also blessed with a public, lesser-known, beautiful white-sand beach named Lambug Beach, which is definitely worth a look.

A Lazy Afternoon at Lambug Beach 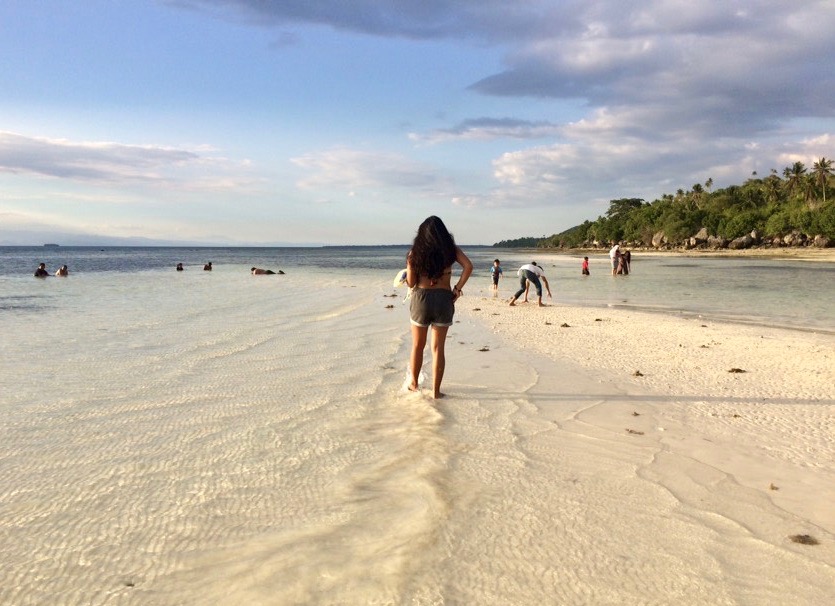 Our plan was to take a trek to Osmeña Peak after our Canyoneering adventure. But our canyoning journey ended late, at around 2:30 pm so we didn’t have enough time (as well as energy and drive) to go for another physically demanding activity. We would have missed the sunset view from the peak had we gone through with our original plan. But we decided to heed our guide’s advice and opted to visit Osmeña Peak the next morning.

This turned out to be a brilliant idea because we were able to discover a great beach destination that eventually became one of our favorite stops while we were in Badian. Had I known that Jaira was into beaches, I would have booked us at one of the seaside properties in Lambug Beach.

Well, there’s a next time.

We still made the most out of our afternoon trips to this beach hideaway. It was only 15 minutes away from Ging-Ging Tourist Inn. Outside our hotel, it was easy to hail a trike driver to take us to this surprisingly uncrowded beach destination.

Though it’s not enticing to swim in Lambug Beach during late afternoons, the sunset can be dramatic. When we first visited, we were lucky to get there in time for the golden hour.

We were greeted by these captivating views. I took my phone out and started taking pictures. Jaira also snapped tons of selfies with the sandbar, the sky, and the setting sun as her background.

I could tell she was happy.

I snapped a few photos of her while she was exploring the peculiar composition of the sand and the sea. She said something about the sand being ‘different.’ I got curious so I slipped out of my flip flops, feeling the changes in the sand texture from clay-like to powdery.

While walking along the beach, we thought of coming back the following day for a daytime visit. 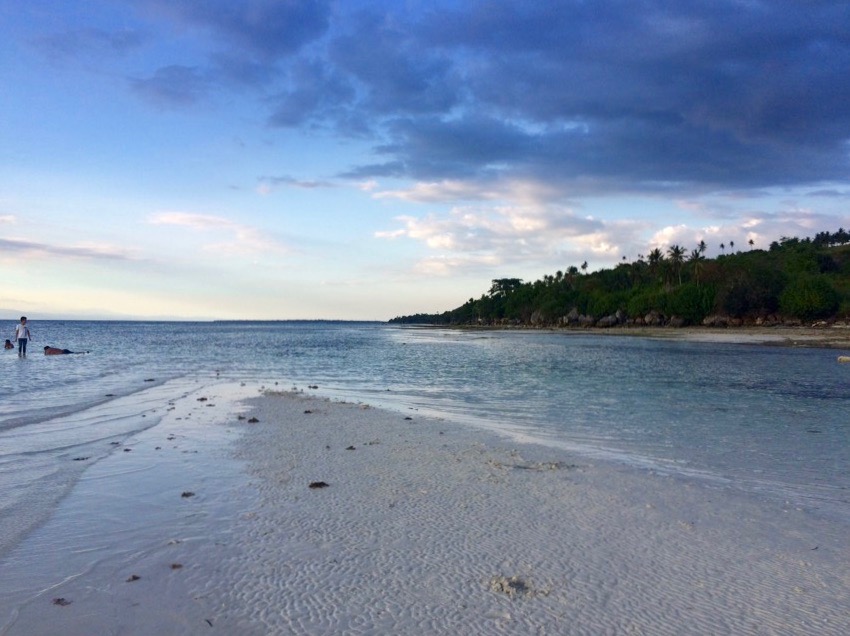 Drinking on the Beach

The next day was packed with trips to Osmena Peak and Inambakan Falls so we didn’t have time to go to Lambug Beach in the morning. We went there again on a late afternoon instead. It seemed like a daily ritual we’d tacitly agreed on. 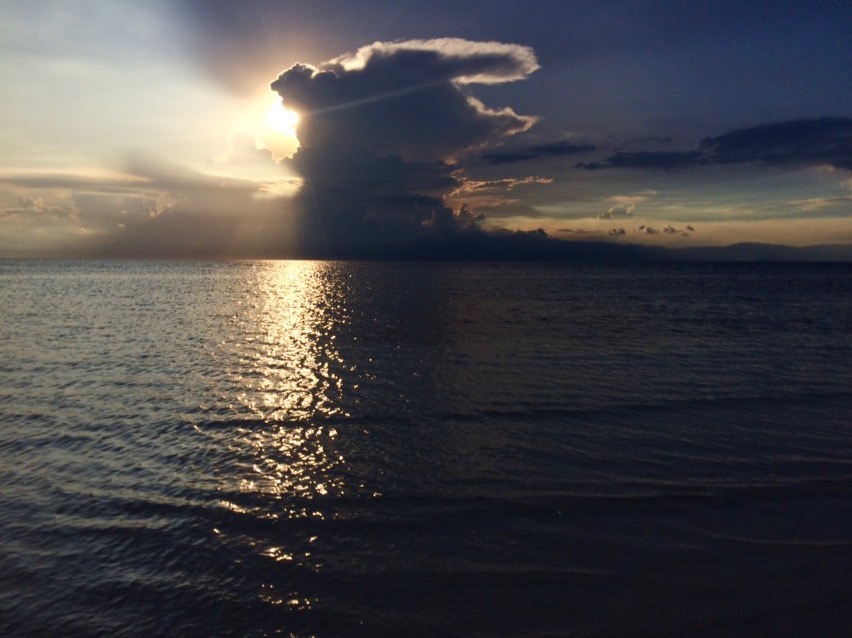 This time was different, though. The sandbar we saw the previous day disappeared. Perhaps, the tide buried it?

So we ended up drinking on the beach. Beers and other types of liquors are sold in sari-sari stores near the shore. She’s 19 so she’s allowed to drink. Don’t ask about my age, I’m legally allowed to drink as much as I want. 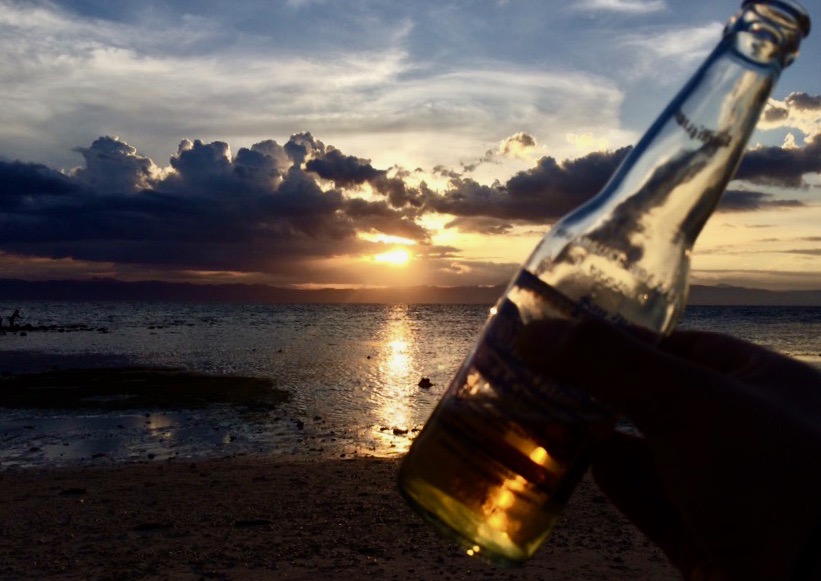 After a few sips, we got into talking about career and aspirations. She’s still about to enter that confusing stage of choosing a career. Well, great for her, she really knew that she wanted to be a surgeon.

She asked me if I had any regrets. I don’t know what got into me (actually, I knew it was the spirit talking) that I went on sharing about having limited choices back when I was in college. In my own words, I told her that I chose teaching as a major out of necessity. I wanted to try Biology and discover the great wonders of the sea but it was too expensive a course to take at that time.

I don’t regret where I am. I told her that and she was silent. Whether she believed it or not, it didn’t really matter. It was the first time we had a real heart-to-heart talk – and that’s progress.

The Real Charm of Lambug Beach

Lambug Beach in Badian is free for everyone. The donut-shaped floating device isn’t. But P70 all-day use is a ‘bargain.’

The next morning, we were up and ready to go back to Lambug Beach for a quick swim. It was also our last day in Badian as we were heading to Oslob next.

After a few minutes of tricycle ride, we reached our favorite beach. The shore and the sea glistened, as if rewarding us for our favoritism. Jaira stopped to buy a donut-shaped, pink floating device. I tried hiding my grin – I just found it weird that a swimmer would need one. 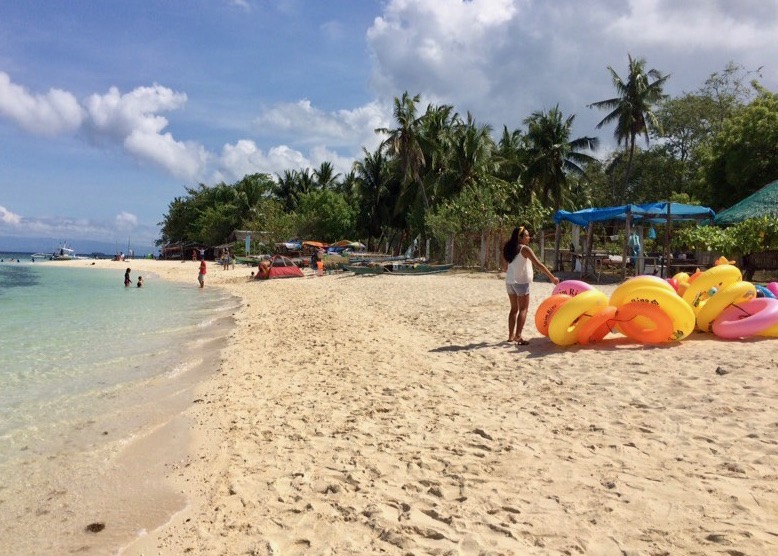 Later, she explained that she and her friends used to stay in the water with these life rings. Unlike foreigners who prefer taking a sunbath, they like to get some sun while getting wet at the same time.

Jaira swam and floated to her heart’s content. While she was blissfully swimming, I thought of getting my own inflatable toy. So I went back to the vendor, paid P70 and got myself one that resembled a shark.

The man renting out the floating devices had set up shop next to a small makeshift store. This stall sold mouthwatering raw green mangoes and other quick bites. The sea was salty so I instantly imagined it would go perfectly with green mangoes. I bought three and offered a piece to Jaira, which she happily took and ate.

With our bouy-friends, Pinky and Sharky, we swam in the blue-green water.  Sadly, our time at Lambug Beach was limited to two hours. We had to get back to our hotel room before 10:30 a.m.. 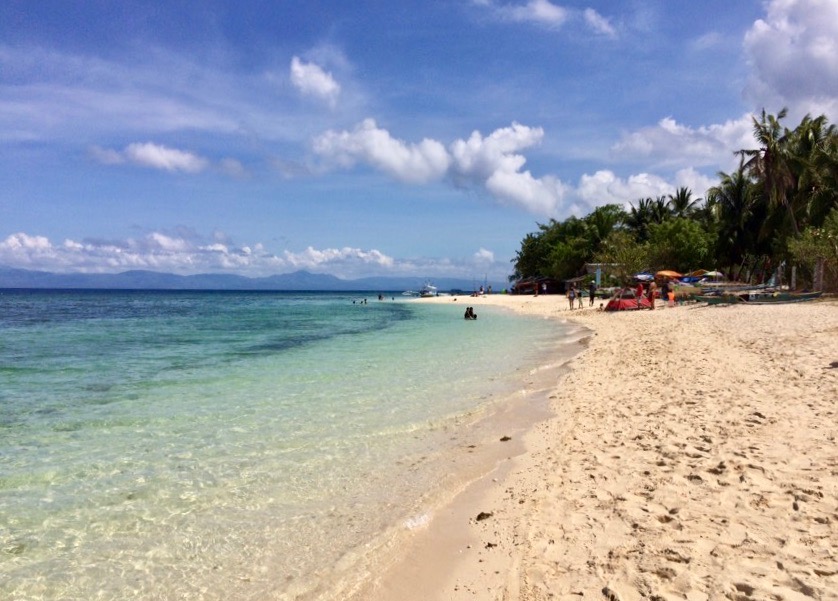 We were ready to move on to another beach destination. What would it be? Sumilon Island.

Visiting Badian this summer? You surely don’t want to miss Lambug Beach. So head over there this weekend or on your next summer trip to Cebu.