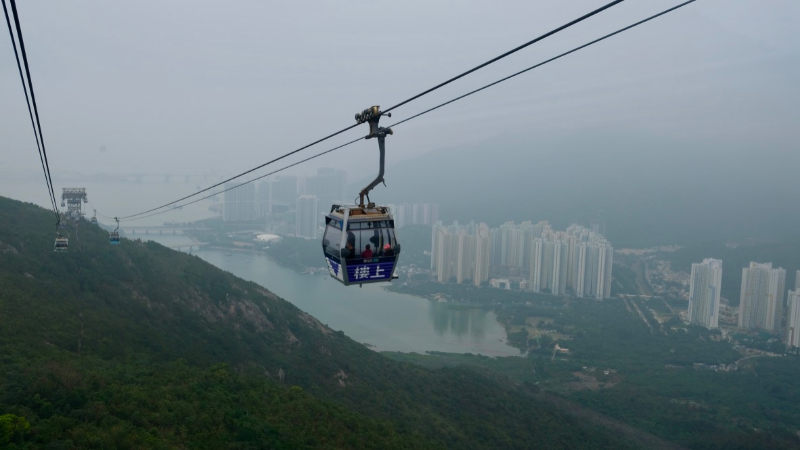 The first time I ever set foot inside a cable car was in Dubai. It was a fun experience but the views from above didn’t justify the cost and queue for the ride. Plus, city views are rarely impressive.

But Hong Kong’s gondola lift promised fresh sights: trees, seas, and hills instead of dull grey buildings. And it delivered! A standard Ngong Ping 360 cable car, which dangles several hundreds of feet from the ground, offers a 360 view of Lantau Island and its surrounding areas.

This non-stop 25-minute, 5.7 km-long cable car ride is included in the list of 501 Must-Take Journeys – a book I’ve been ogling for travel inspiration. At the time the book was written, Ngong Ping 360 was Asia’s biggest cableway.

The premise was simple: journey before destination. That also happens to be my favorite author’s saying. (If you’re wondering who, it’s Brandon Sanderson.)

Of course, one can take a bus or ride a car going to Lantau Island from HK mainland. But these are not as fun and as fast as sailing over crowded streets. And would you really forgo a ride of a lifetime and a chance to see Hong Kong’s unspoiled countryside from a unique vantage point?

Also Read: Is the Big Bus Tour in HongKong Worth It?

So I gave in, envisioning myself and my companions blissfully gliding over Hong Kong’s greener side and mountain vistas inside the comfort of our little cable car. But imagining a scenario is not the same as experiencing it. I knew I was scared of heights but it didn’t stop me from checking this off my trip’s to-do list.

We woke up early in a chilly February morning to catch a train to Ngong Ping 360. After delaying breakfast and stopping by several train stations, we finally arrived at the touristy town of Tung Chung. Seeing a 7-11 store, we stopped by for a quick bite before heading to Ngong Ping 360’s admission area. Despite booking a ticket through Klook, we still had to deal with long lines.

When it was our turn to get inside the cable car, a photographer took a picture of us (which the company tried to sell to tourists later at the disembarkation platform.) Hong Kong has free internet in a lot of places, including this spot, but I mustered all self-control and refrained from googling “Ngong Ping 360 accidents.” Why worsen my anxiety?

Thing is, when something seems too enjoyable to miss, I can turn off my fear-powered alarm bells. I can act stoic and pretend I wasn’t afraid.

But as the cable car floated higher and higher, the little confidence I had slowly frittered away. I just couldn’t look outside anymore.

My companion, Ivy, seemed unbothered by our situation. She would even tease me to open my eyes to see what I’m missing.

And despite my hesitation, I did.

Fog loomed over us hungrily. The sight is what you might call low visibility. Yet it wasn’t scary.

I knew we were high up in the sky and we would likely die in the event the cable car support malfunctioned.

But when one no longer sees a thing on the ground or around, the fear isn’t as strong as it was.

We reached Ngong Ping village unscathed, relieved to be given another hour or so to live. The ride back was equally spine-chilling but by then, I was used to fear, and the breathtaking views below us were effectively distracting.