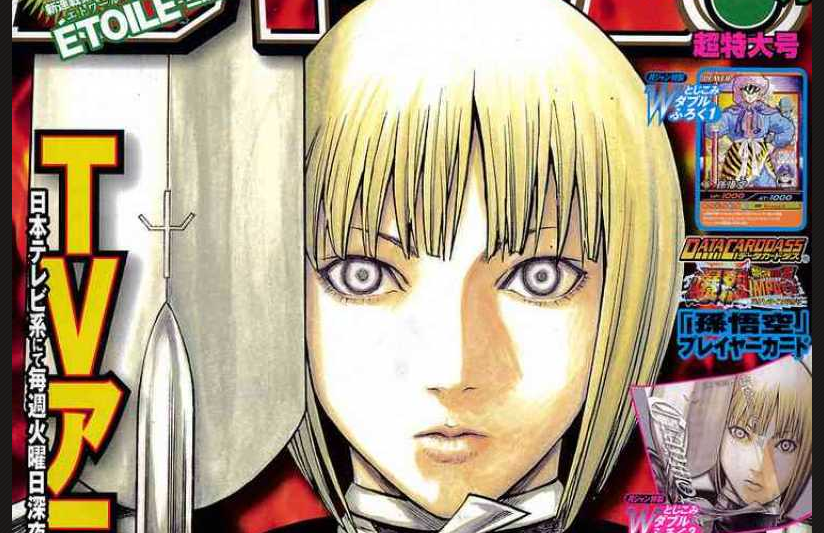 Claymore, a dark fantasy manga series, unveils an aura of the medieval world, exhilarating sword fighting, and ravishing heroines that are sure to stir up sympathy, love and admiration from readers.

Claymores, referring to both the huge swords and the hybrid (half human, half monster) fighters,were sent out on a mission to smell out and exterminate gut-eating monsters (called “yoma”). Claire, the 47th ranked claymore, took care of an outcast child, Raki, when his entire family was devoured by a yoma. As she sets out on a journey to defend towns against yomas, she hasn’t foreseen what “fostering a child” would bring out of her past and present.

Claymore‘s beauty lies in the consequences of violated human nature. What would happen if human and monster genes were combined? Could there be an equal distribution of traits? How long could they keep the balance between two contrasting forces in a single being? As the writer reveals the intricacies of a claymore, more questions unfold. The organization that created these female-monster fusions poses mysteries worth investigating.

When it comes to plot, I’d say Norihiro Yagi successfully blended scenes that deliver blows to the gut and moments that pinch the heart through her decent to dazzling artwork. At some point, I found myself feeling and thinking like a claymore- an effect of deep characterization.

If you haven’t given this a try because of its seemingly stereotypical theme, better consider checking out the first few chapters and don’t blame me if you couldn’t resist reading up to the last page.

(It must be my fave among all the manga series I’ve read [well, I haven’t read so many!]. The only review I managed to save in my USB flash mem.)

One Reply to “Claymore by Norihiro Yagi”