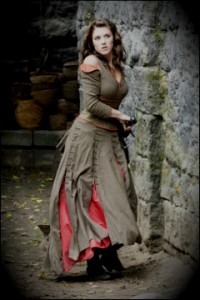 Oedipus the King was my teacher’s pick for the class stage play presentation. We had to divide this popular Greek myth into five acts since there were five groups to perform them. I was blessed with pretty and coachable group mates. We got “Oedipus’ Teenage Life” part of the play. Julie Anne was our beautiful queen singing to her baby, Oedipus, whom she’d soon marry, unaware he was her son. Pinky became our young Oedipus- yes, a girl. There is something about high school male’s ego – it’s untouchable. So, I put them at the backstage, i.e. special effects and props creators. We got the highest grade for this class requirement. Task difficulty: Easy.

After this success, I thought the next play before graduation should be catchy. I was a lazy student, then. Most of my teachers would talk to me secretly just to remind me to be a bit studious. With my thick eyebrows, it was easy to feign seriousness. Yet inside me lies the truth. I was never an ardent researcher until “Marvelous Maid Marian.”

T’was the best story I could make out of our (dys)functional community library. It was a haven of children’s books that served even adolescents like me. Robin Hood was my fascination, but he was so well-known. A cliché. Then I met Marian, and decided to magnify her character. T’was the toughest yet the most satisfying homework I’ve ever had in high school.

I bet my classmates would love to hear again about it. Or would they remember the story as much as the writer who spun it? Why am I smiling for no reasons? Good thoughts for good sleep. Great night, folks.