What is the price of ambition? 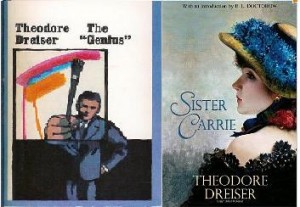 Barely reading half of Theodore Dreiser’s classic work “Sister Carrie”, I could quite guess where the story would lead. I was first acquainted with Dreiser through the book “The Genius”, which main character was Eugene, who humbly began as a resident of rural Illinois yet later bloomed into an important artist of the city of Chicago.

Dreiser’s creations, Carrie and Eugene, were both ambitious, though the woman was far less strong-willed than the man. In both novels, he paints Chicago’s best and worst features and weave his characters’ feats and defeats around its opportunities, luxuries, lures and deceptions.

As a young adult, I could greatly relate to the struggles of Dreiser’s characters, whose options have been limited to either “embrace” the realities of the new city or “shrink” into the shadows of their home town, ergo forego sanity.

Despite the irresistible honesty his books hold, I still I didn’t like how limitedly he portrayed women. Or how he probably picked weak ones. If you’re a woman, you can ignore his slight condescensions, take note of his misconceptions, and retaliate by posting a review (if you’ve got the time).

Surely, to disagree is one of the best ways to learn. That said, to meet someone who disagrees with our comfortable notions is a huge pleasure. Meet Dreiser now.

One Reply to “Sister Carrie”