After battling with the alarm, I rose at 7:45. I knew I was late for the things I set out to do. My day was halved fixing and preparing loads and loads of papers, and following immediate requests from bosses.

“Are the copies ready yet?” 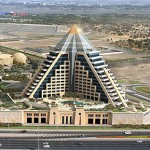 “Have you sent Akbar to deposit my passport?”

“Would you be able to hand in those materials in 15 minutes?”

Even my nicest outfit wore off satisfying all orders. Luckily,Kav snatched me, (despite me being fussy) from another “loaded day”. She insisted I attend the Compliance Training for Sales Reps and Admins at Raffles Hotel.

If Sheraton Creek Hotel brought me back to the Renaissance era, Raffles struck me with its Mid-Eastern atmosphere-  the Pyramid Era’s opulence. Had I been alone upon entering the place, I would have taken pictures and lingered longer in each fascinating corner.

My co-admins just escorted me to the conference room, they left as quickly as they’d set foot on the 3rd floor. I was left alone with a bunch of faces I hardly knew, and who never seemed to recognize me (except for those who are working in our office). I sought the washroom. It is where I go when I hunger for self-assurance. When I want to hear my voice and see myself talk in the mirror. It was not enough replacement to a real person but it was something, which was better than utter loneliness.

I reminded myself why I was there: to learn enough about the company’s compliance measures. Better be informed or I’d screw up and risk the business’ reputation. Then, I was fine tuned.

On my way back, I saw the Country brand manager whom I greeted formally with a handshake. He then suggested me to get some refreshments in the Break room, where the hotel staff guided me accordingly. At the end of the first session, more and more names rang a bell. I then became more than just a voice on the phone to them, so were they to me.