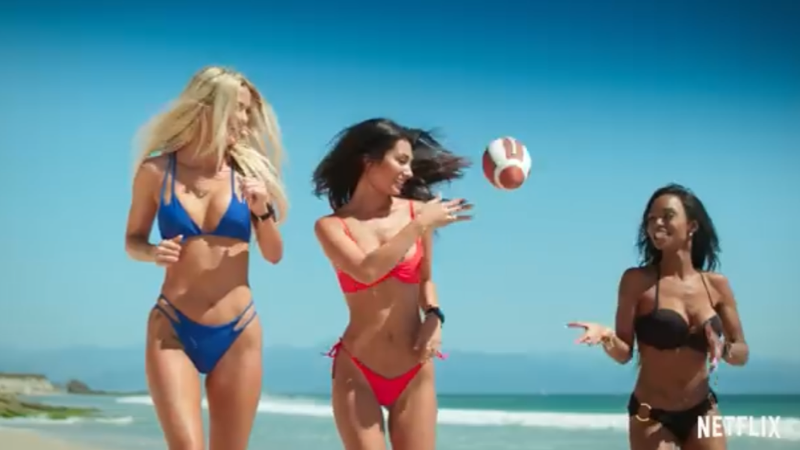 Ten heterosexual male and female models meet in a picturesque island to find romance. A cash prize worth $100,000 awaits the dating game winner. The rules of this month-long retreat are decided by an AI lady boss whom everyone calls “Lana.”

Who would take home the money? Who would go home with a worthy partner? You’re going to find out after eight episodes.

Without spoilers, you could guess how this show would end. But you’re missing the point if you’re watching it and seriously wondering who would win the money. Because from the beginning, it’s not about the money. It’s a platform where pretty and sexy guys and gals can get attention and instant fame to advance their careers. Just like what other reality TV shows have done here in the Philippines. Pinoy Big Brother is nothing but a launch pad for budding actors, hosts and talents for a TV network.

Yet, there’s a plot twist on this dating show that intrigued viewers like me: no kissing, sex, or any form of sexual release during the entire month of living in the same beautiful beach house. No kidding. Those were the rules.

It doesn’t help that the guys are mostly  half naked and the gals are wearing skimpy bikinis all day. What do you get? People who want to break rules and those who exercise maximum restraint to keep the money. Now, that’s bound to cause a conflict or drama.

But it’s not compelling enough. $100,000 versus a night with a person you dream of sleeping with? The latter will always be more attractive. And that’s what actually happened: Dating couples break rules, reducing the prize money to a pittance.

Sorry for the spoilers. But really, you should have seen that coming from watching the first episode alone. Or the trailer alone.

The show never promised it would make you think hard about important life decisions (i.e. choosing a partner). It’s just a stupid TV series meant to make you ogle beautiful (albeit doctored) bodies and enjoy beach vacation scenes we all miss so much these days. It also doesn’t hurt to laugh at some obviously scripted lines.

I no longer wonder why it’s one of the top 10 most watched shows on Netflix in the Philippines this week.Yes, it’s a mess (a hot mess at that), but maybe it’s just the distraction we need to stop wasting energy on things we can’t control: the government’s (slow) response to CoVid-19, the development of vaccine, or the end of ECQ. If you can stay at home and watch this or other shows, you take back some control while staying safe.