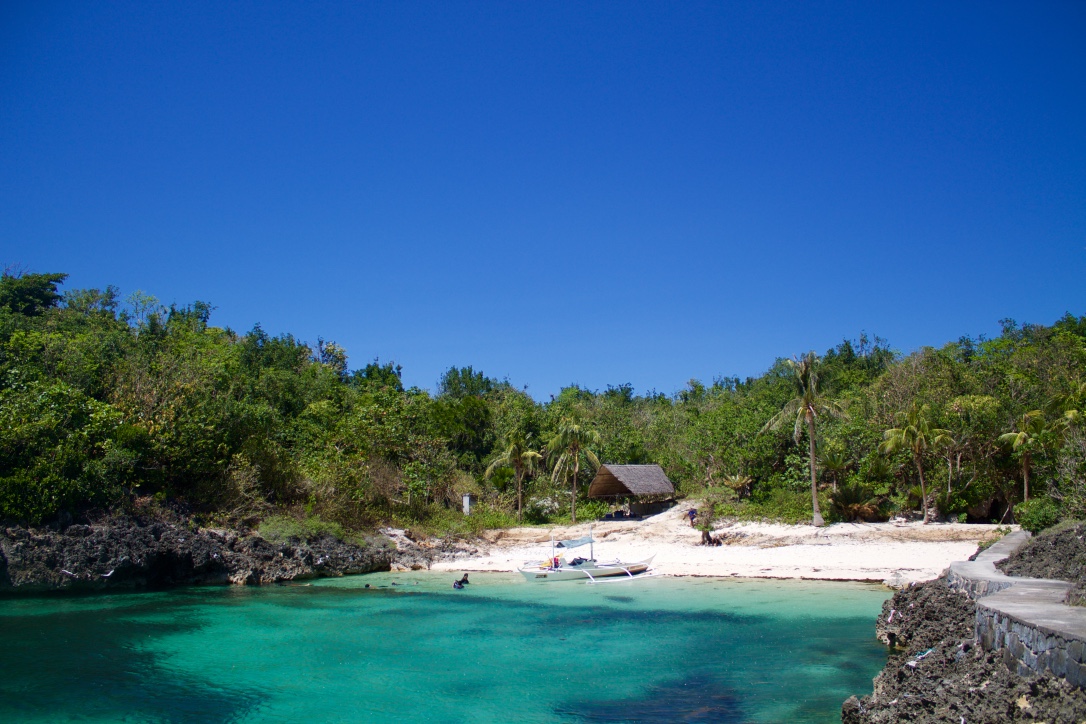 Carnaza Island has been a frequent subject of enormous interest to us.

One morning over coffee,  we were watching yet again another video of it for inspiration. It was about Osmeña, who owns most of Carnaza, advertising his private resort and showing the splendid spots of the island.

Later that fateful day, Brennan of Baktin Incorporation, sent me a message on FB, saying he needed more people to join him on his journey to Carnaza. Wouldn’t you call that ‘serendipity’?

Last-minute shopping for goggles and swimwear done, we hardly slept through the night before the trip. Concerns about safety, comfort, and social awkwardness tormented me. (I’m uncool like that.) Plus, the call time was 3AM at the North Bus terminal.

(See Also: The Ugly Truths About Most Weekend Travels)

As for Neil, the boy was so excited because he’d finally get to swim after about six months of traveling hiatus. I turned to him to fuel my energy and greet Carnaza with the exuberance it deserves.

Unsurprisingly, swim he did just a few moments after we reached Carnaza Island’s shore. Perceiving the young child locked in his adult body, the kids instantly made him part of their gang. Afterwards, they went up a nearby hill with a sense of urgency. 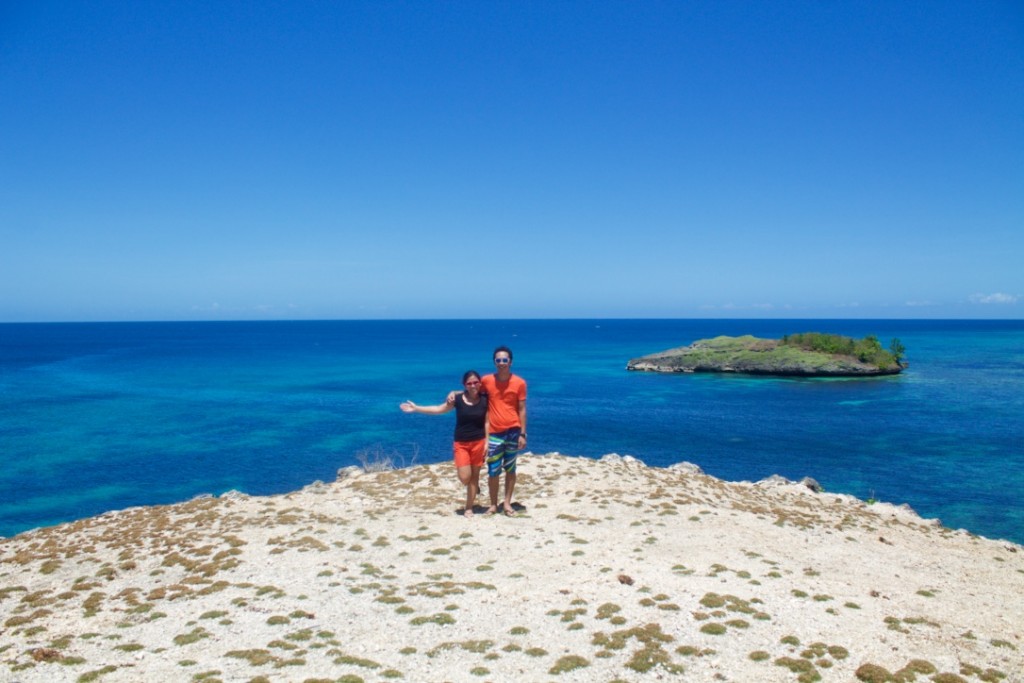 So Neil and his new mates climbed the hill where one can linger over the island’s captivating features – the view of islets strewn around, of colorful fishing boats lining up the shore, and of the ocean’s playful hues against the deep blue sky. 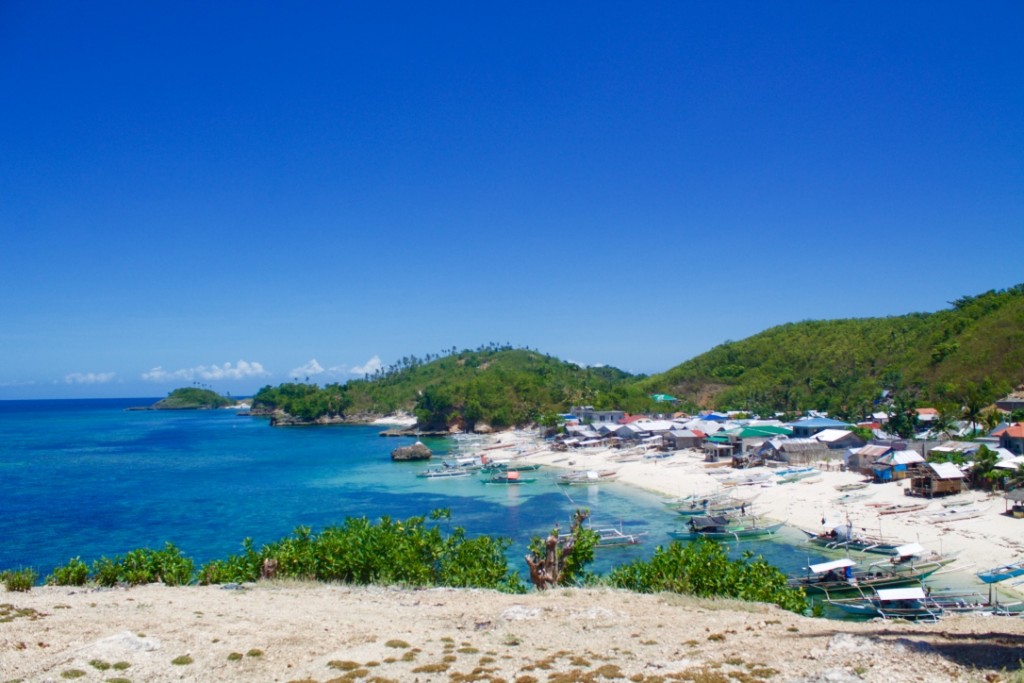 While we were busy admiring the island’s panorama, our guides (a bunch of kids) gathered near the edge of a cliff. Then, I saw two children jumped off it – splash! After emerging from the deep plunge, they dared Neil to do the same. He then looked at the water, estimated the cliff’s height, then grinning like mad, he gathered air into his lungs and jumped into the water! 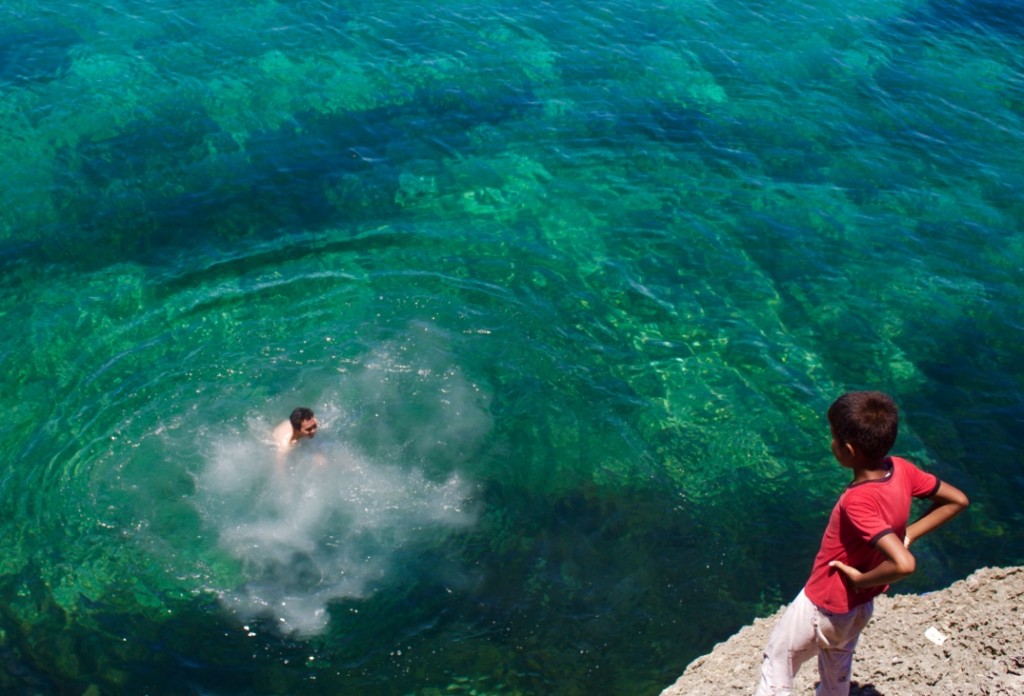 The super fan in me gasped in delight while I took photos and a few videos of the entire event. Still catching his breath, he told me to try it but the coward in me refused. (As I said, I’m uncool like that.)

Food and travel are always connected.  The family who adopted us knew what city dwellers like us craved most: SEAFOODS. After we prayed, Brennan told us to applaud the sheer awesomeness of our food. We happily obeyed and our cheerful hosts gave a hearty laugh.

We devoured our meals without foresight, forgetting that blog post like this would need some visuals. Wait for Bren’s Carnaza post to find out about the delectable lunch, dinner, and breakfast we had as well as the complete details of this DIY trip.

Mealtimes in Carnaza were unexpectedly among our most cherished experiences during our visit. 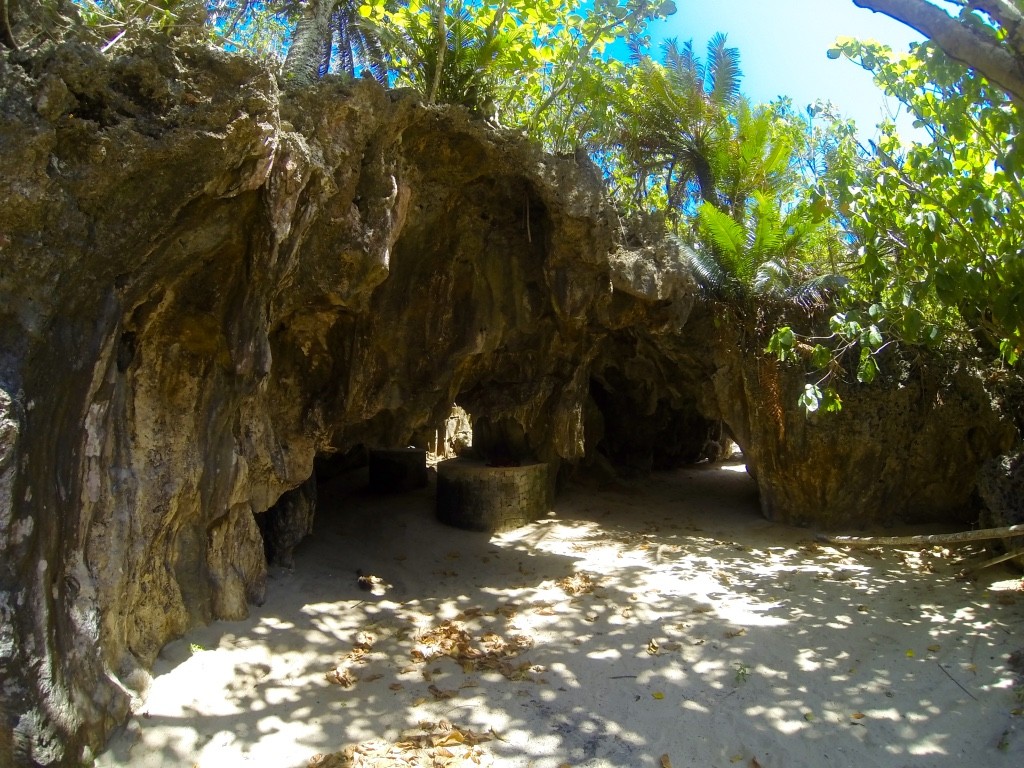 There’s nothing much to tell about this area besides its cave, emerald waters, and the oddly placed helipad. 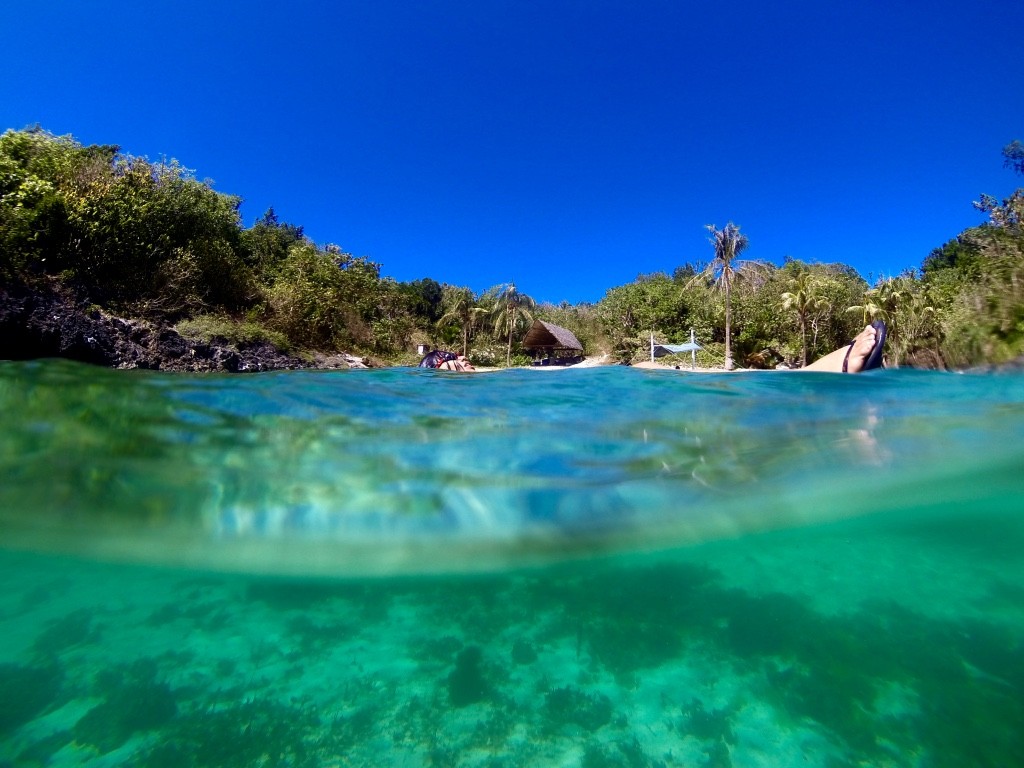 Neil was most fascinated with it that he took a picture of us here many times. The lad surely was surprised to find this curious thing in an island. 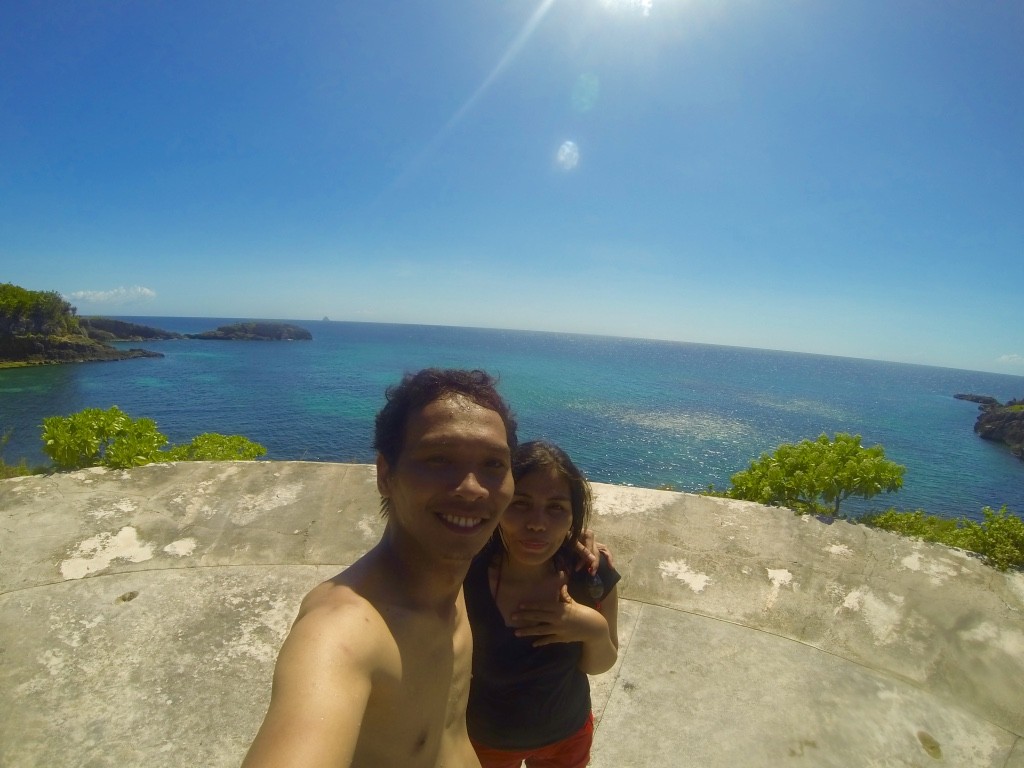 The cove was witness to our lazy snooze, aimless sauntering, and  a bit of snorkeling. We whiled away the afternoon here for about an hour or two then we moved to another shore. La Manok Island was supposed to be our next stop but Cleo, one of the boatmen, said strong tides awaited us. He had known the seas around here all his life, it would be foolish to go against his advice.

You won’t find any souvenir shop in Carnaza. Isn’t that amazing? I mean, 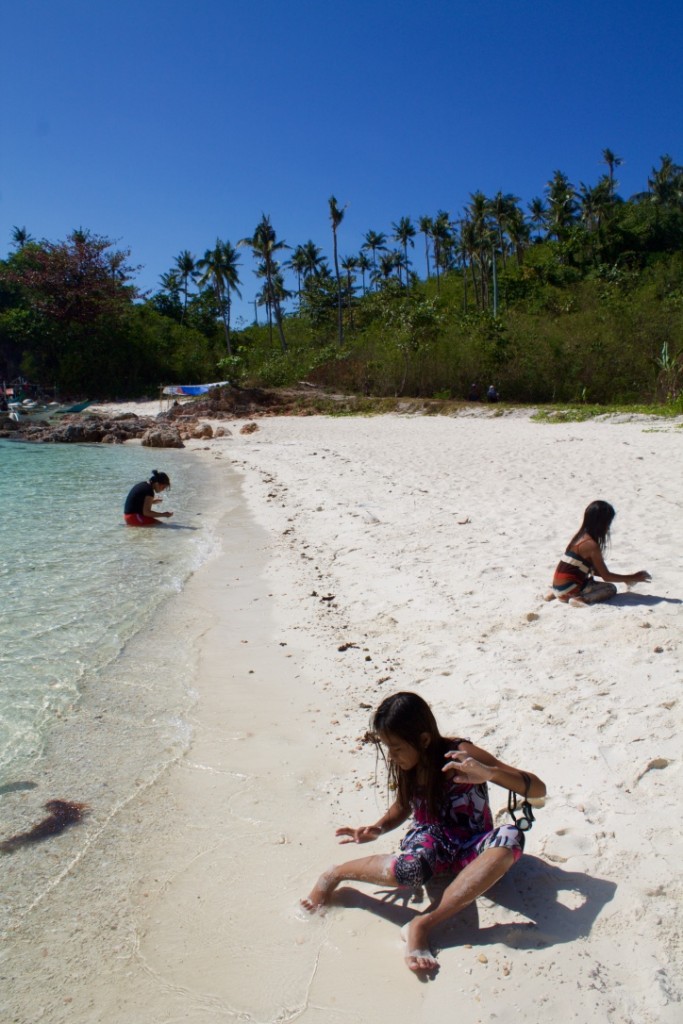 you can improvise and personalize souvenirs. That, at least, was my plan. Find island treasures, bring them home, and then create some unique accessories to give away.

The wave-battered shorelines of Carnaza meant tons of seashells and pretty beach stones. When I first began picking up a few colorful stones, I was filled with glee. Like holding the most precious pieces in the world! I guess the group sensed my happiness that they started collecting and giving beach stones to me. Even our guides, the daughters of our hosts, gave me their best finds. How sweet of them all!

I was totally surprised myself that I became addicted to hoarding beach stones.

Soon after we were done bathing, the kids took us for a hike to the airstrip, the existence of which I doubted very much at first. 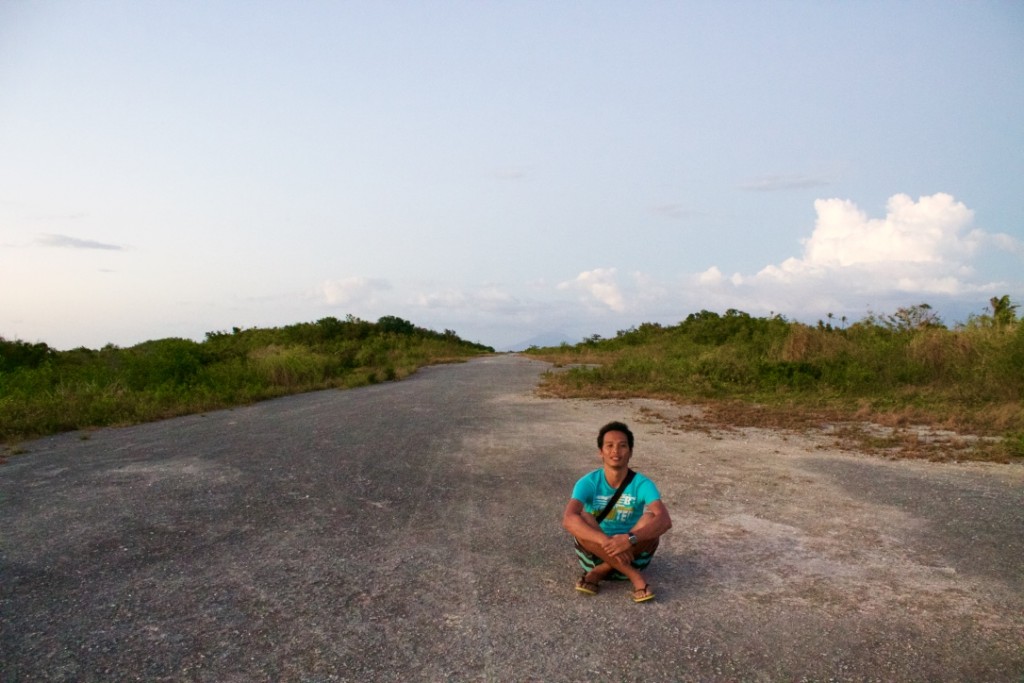 The trek proved challenging though brief. On our way, we also met a few of the town folks – some old, some young, but most had smiling eyes.

Anxious to take photos of the glorious sunset, I kept asking the kids how far we were from the airstrip, to which they replied, ‘’really near’.  And they were right.

The team felt the need for a group picture with this striking view as the background.

The sky was such a braggart, displaying gorgeous patterns of color and light. I ogled the scenery because it would be long before I could see something this wonderful again. 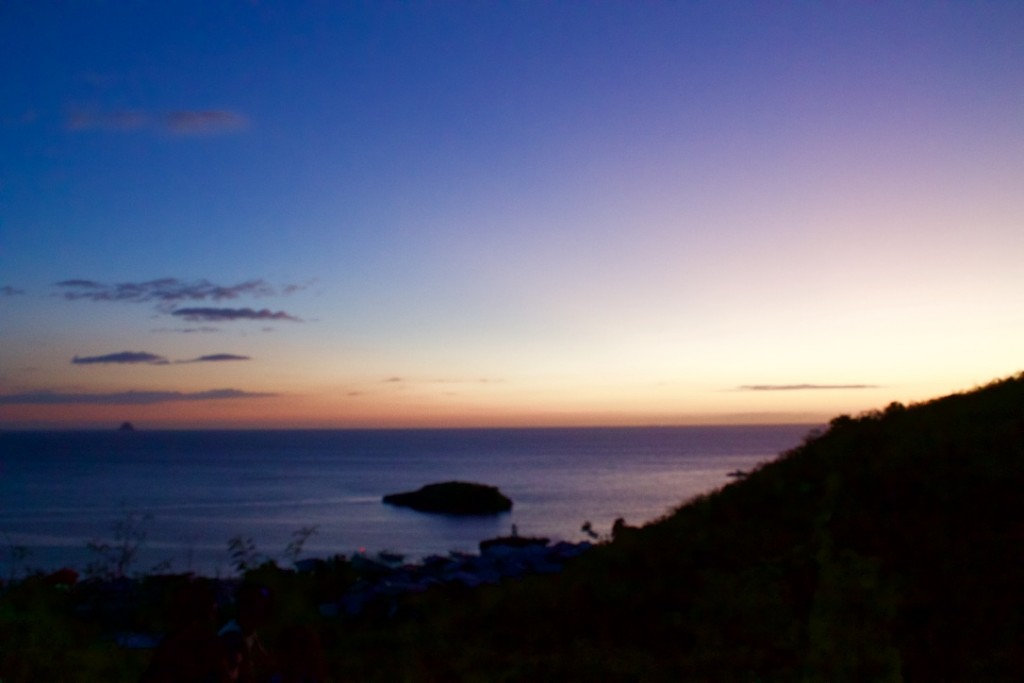 Sailing Back to Cebu

No Carnaza tale will be complete nor correct without a bit of heart-stopping experience with waves. I told you earlier that I had imagined every possible worst scenario about this trip. Neil also hoped for some waves to amuse us during a monotonous boat ride bound for Cebu mainland.

His wish was granted. Yes, he was awakened by this sight. And I didn’t know what inspired me to take this shot of angry waves. 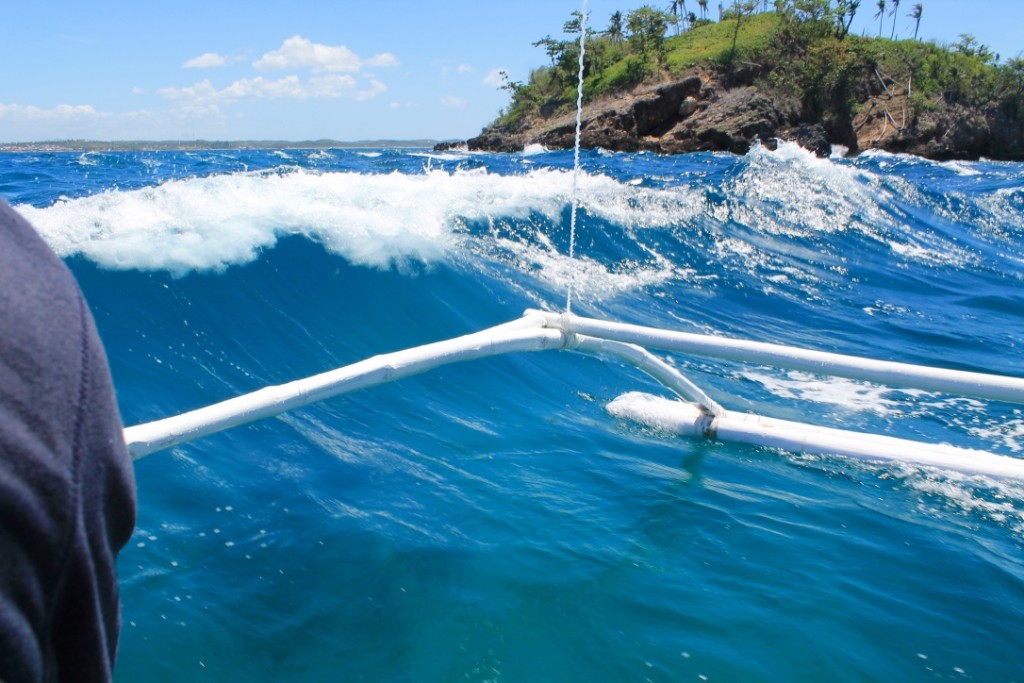 No one was hurt, thank God, but our boat’s engine stopped. Long story short, our brave and highly skilled boatmen got us through the swift and strong tides. Apparently, we had lived to tell this tale.