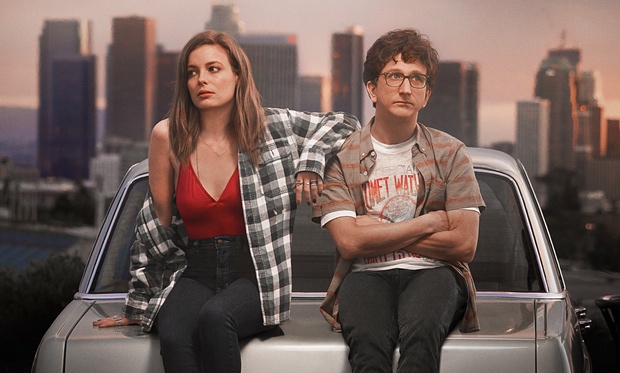 While it’s fresh, I’ll share some of my thoughts about this romantic comedy series Netflix has recently released.

My best friend was hooked on it during the first couple of episodes so he persuaded me to watch it.

It’s called ‘Love’. So is their Twitter page. Isn’t that cool?

Gillian Jacobs and Paul Rust are playing the flawed characters in the series.

As soon as he discovered it was Judd Apatow’s work (The 40-Year Old Virgin, Knocked Up, Bridesmaid, and more), he had higher expectations of the show.

(Watching NetFlix on a Browser? See How to Change Netflix Video & Audio Quality on Browser)

And we were not disappointed.

We all know the advantages of TV series over movies. As a writer, you have time to show the depth of the characters by putting them in difficult and awkward situations. Though not every scene is cringe-worthy, other parts of ‘Love’ are so unbearable to watch alone. (Thank me for the fair warning.)

You need to be with someone to feel frustrated with when the characters are acting crazy – doing stupid things they shouldn’t do.

I commend the honesty depicted by the show. Gillian, being the serial buzzkill, has played the role of Mickey so well. I hated and pitied her at the same time. How could she make me feel that way? Only convincing characters could do that.

There were moments when I felt like punching Gus (Paul Rust) for being clueless, harsh, and imprudent. But I couldn’t blame him. His experiences and values made him act in ways he didn’t know he would later regret.

The best thing about ‘Love’ is that it is excruciatingly truthful. As a viewer, it made me question myself, my flaws – the weaknesses in my character – that come out at trying times.

In my best days, I could be sweet, caring, loving, and forgiving but at bad times, when the shittiest things happen, I struggle to be that eternal sunshine people wish I could be.

Anyway, see what this rom-com TV series has done to me?

It’s addicting plus it helps me reflect on my own frailties.

I find myself talking to the characters saying, ‘yeah, me too’ or ‘I hear you’.

The series has ended in a hopeful note but it was in no way overdone, like ‘and they live happily ever after’.

Flawed as we are, we still have redeeming qualities to keep us going and trying until we find the real love that we have been chasing.

Because no matter who you are, you deserve, need, and want love.