Finding out Megan Reeves’ real-life character didn’t come as a surprise. She’s the chic that has spent most of her career working with men, not quite far from her role at Numb3rs, the only woman agent daily delving into crime puzzles and solutions. She happened to be chemically intertwined, though less physically compatible, with Charlie’s dearest colleague and friend, Larry Fleinhardt. 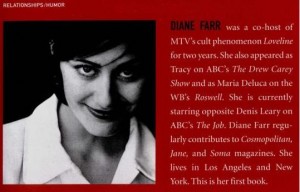 My New Fave: The Girl Code

There’s more. This fab and brilliant fella has written a book entitled “The Girl Code: The Secret Language of Single Women”. She dedicates the book to all the women who need to take a break just for laughs and to reach out to their equally great yet struggling single friends.

Browsing the first few parts of the book made me love Megan, or Diane, more than I used to. I’m just a tad sad that she’s not part of Numb3rs Season 4 – I don’t think anyone else could fill her place. I’m sure I’ll miss her clever conversations with Larry. More so, her fine flirting, rough gun-fighting, and psychoanalyzing would be utterly missed!