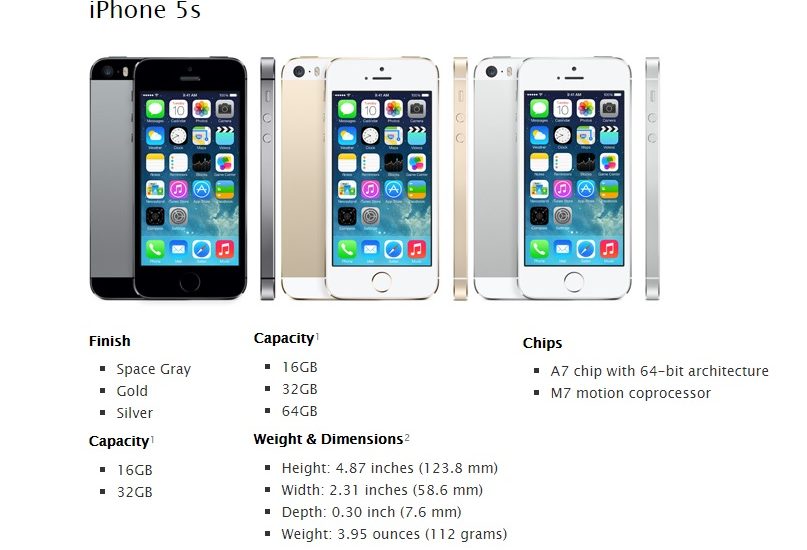 After nearly two years with Globe, I’m finally about to get rid of a P1,299/month phone and internet bill. I got an iPhone 5s from them last April 2016 so this coming April 2018, I’m free. But not completely.

I called their customer service hotline (211) today to ask about my options. Since I can’t end my contract with them (as I like to keep my current number), I’m left with their recontracting options.

“So, what’s the lowest plan I can get to keep my current number?” I asked.

The agent said P599/mo is the lowest package I could get whether I choose a SIM-only plan or a recontracting plan with a new, free phone.

Of course, like what most people would do, I checked the prices of these handsets and found them to be within the P5,000 -P7,000 range. 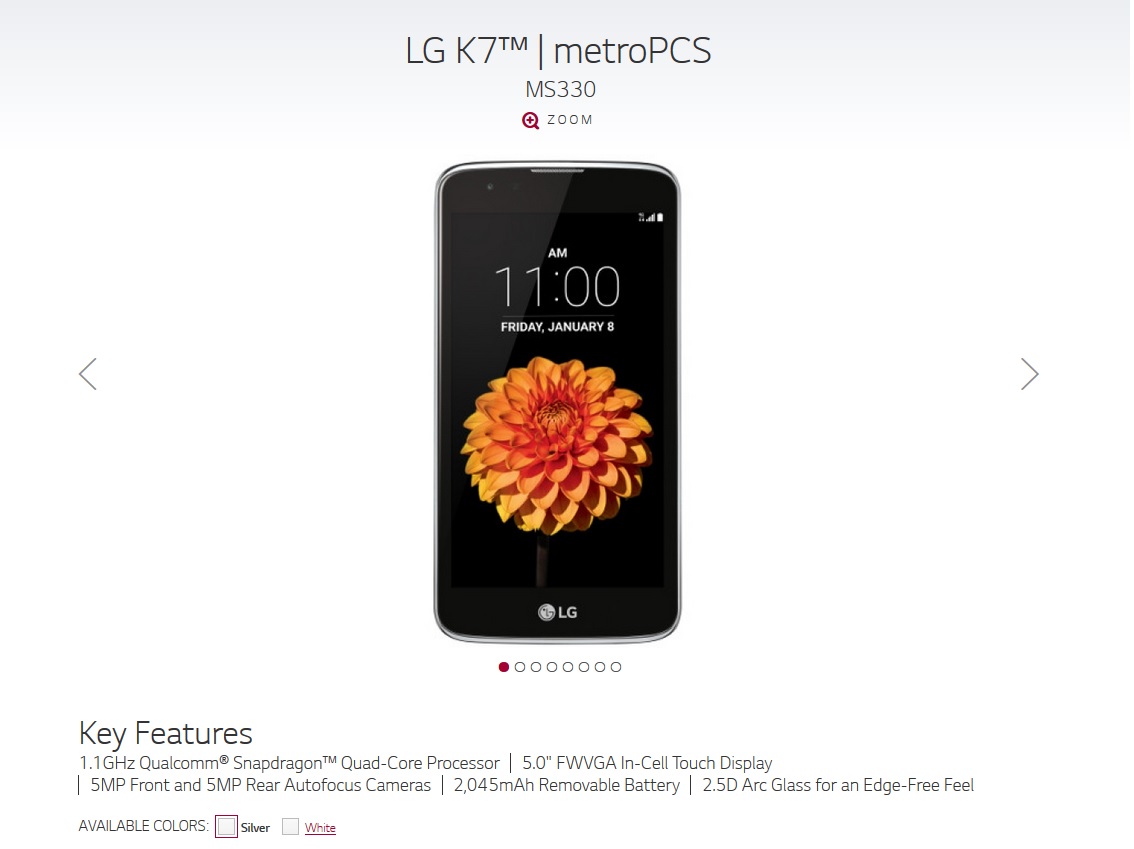 I like to own an LG phone again. Even if I won’t use it for calling or sending SMS. I think it would be great for reading e-books. Do you like any of these phones?

What If You Want the Hottest Gadgets?

Here is where it gets a little tricky. I’ve been dying to get my hands on an iPhone 7 plus since I saw its awesome camera. But man, the cash-out for this gadget is just too much: P30,000 on top of a 1,299 Globe monthly plan. A quick search online would tell you that an Iphone 7 plus costs about P37,000. I don’t think it’s worth it.

Since I’m working from home now and obviously connected to my internet at home 24/7, I don’t see the need for data. Even if I plan to travel more in the next few months, I still think it’s a waste to pay for a service I don’t use that much. An on-demand internet is a better option for me. You might be in a different situation so consider your circumstances before you sign up for another two years with this telecom.

What You Need to Get One of Globe’s Free Phones

Settle your outstanding bills. Find out the end date of your contract and call the hotline number a month before your end-of-contract date to downgrade your plan to P599. Here are the inclusions in this lower package:

I hope the process of claiming Globe’s Free phone is as easy as what the agent told me. According to him, I simply need to dial 211 and inform them about downgrading my plan from P1299 to P599. Wondering if you could avail a sim-only plan? You definitely could but don’t. You are entitled to a free phone at the end of your contract so use it.

Return here after March 20 so you could read about my experience claiming my not-so-glamorous yet free phone from Globe. You deserve this reward after two years of loyalty.

If you own a postpaid Globe plan and have claimed a free phone before, please share your experience in the comments below. Thanks very much.

On March 21, I called the Globe hotline (211) to request for a new phone and a downgraded plan of P599.  They told me that the only phone they had for this plan was Samsung Galaxy J2 Prime. I said okay and confirmed the order by phone.

Before Holy Week break, Globe reps texted me. My phone was ready for pick-up! Here are the text messages that I got from them: 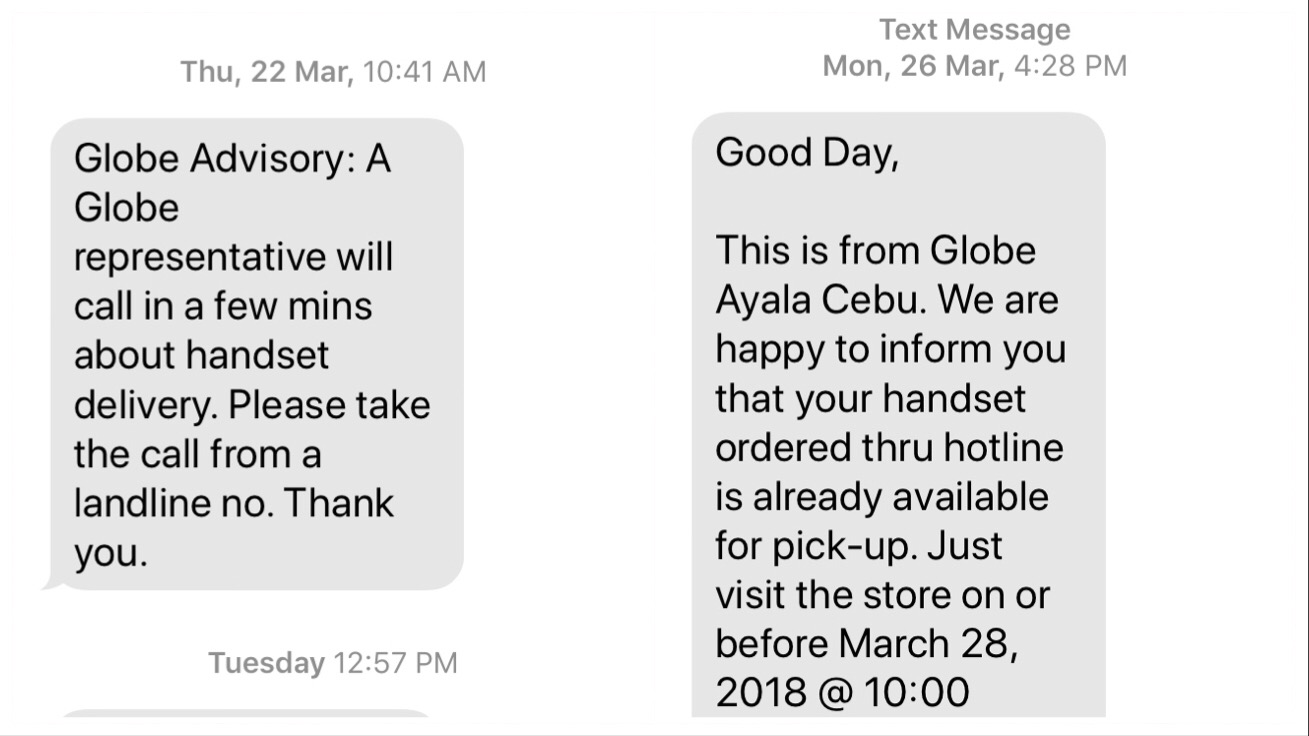 On March 27, I went to Globe Ayala Cebu to pick up my Samsung J2 Prime phone but the queue was too long. On April 3, I was finally able to get my new Globe Handset. It came with a downgraded 599 plan, which meant I could keep the same number.

Take a look at the phone: 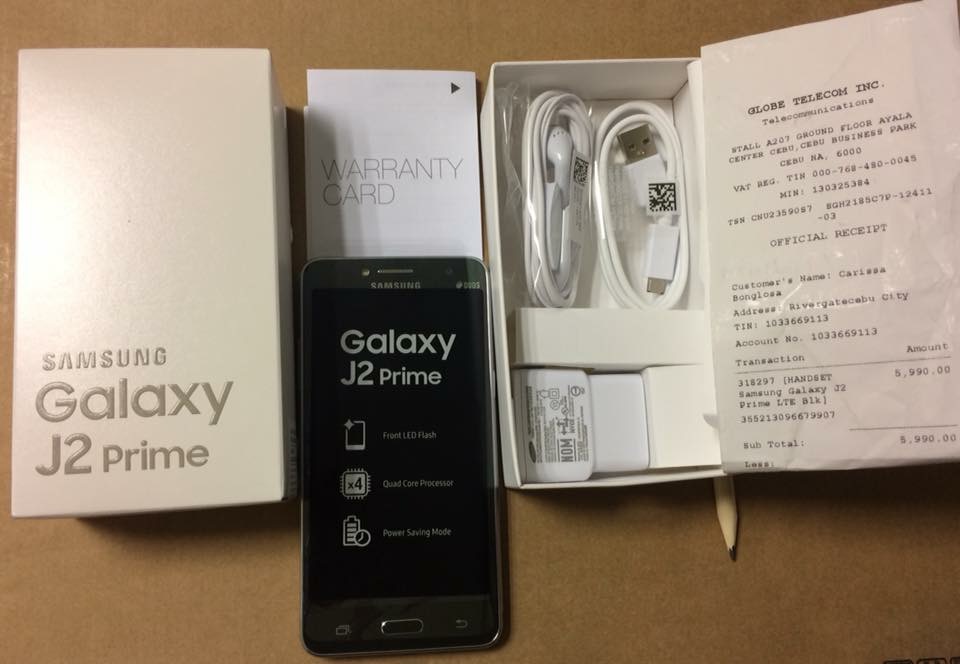 If you look to the right-most side of above picture, you can see the handset’s cost: P5,990.

The phone was okay. I had to buy an extra sim card to test it. If you’re confused which slot is for SIM card, that’s easy, choose the left slot.

Overall, I’m happy with Globe’s response. I was also able to give the phone away for a decent sum of money. Now, I’m looking forward to cutting my phone bill by more than half and start saving for a phone with a better camera.

Have you already received your free phone from Globe? Tell me about your experience in the comment section.