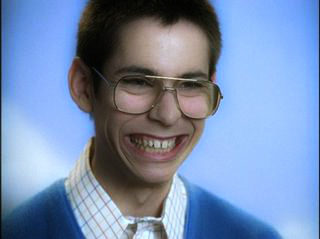 Bill: Don’t worry. (pause) You only have 3 minutes and 26 seconds (pause) left in heaven.
-Another Scene-
Bill: What’s it like being pretty?
Cheerleader: I don’t know. Like… this is the only way I’ve ever looked.
Bill: I think people treat you nicer when you’re pretty.
Cheerleader: What makes you say that?
Bill: ’Cause you’re never nice to me.
Girl: That is not true, Bill. Every time I look at you you look like you’re having a pretty good time. You’re always laughing or something… so what are you laughing about?
Bill: (pauses) I watch movies in my head.
-Laughter-

Bill became my favorite character at Freaks and Geeks after this encounter, not because he’s a geek , but because he can be happy all by himself. Among the cast, he’s got the most adorable ideas and unconventional wisdom, as revealed by these lines: